Yesterday ..it was Shivratri and like every year..I had a fast for showing my devotion for the almighty Lord Shiva.. who shares coincidently the same name that of me :P 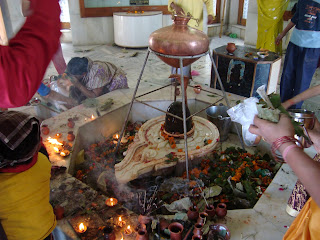 I was named after him..and I found a connection here with the almighty lord shiva...and believe me if he don't want u here u won't be able to have a visit..

Shivratri is a day of high religious importance...Parvati used to do the fast for getting Lord as her husband and it since then it is a highly pious day where girls ask for husbands and the others for education wealth from Lord Shiva.

So ..I thought since it is may be my highest degree that I m pursuing ( I don't kno if one has higher degree than a PhD) ..I guess it is high time for me to ask from Lord Shiva some Placement ;)
lol

Jokes apart...I was on fast and believe me eating nothing is far more easier than eating fruits...and I hate eating fruits especially wen it is the only option to eat...So I mostly stayed hungry...:P

The morning started with the claps ...Slumdog Millionaire and Smile pinki got Academy awards and as as usual Hugh Jackman was great in hosting the hollywood's biggest gala but more beautiful was Anna Hathaway. I admired the whole morning with her thoughts...rest all is censored :P
Then we left for the a nearby temple to devote my devotion to Shiv Linga...the reprodutive and the creative part of the God in position of unison with the same of goddess of power 'Ma shakti...' 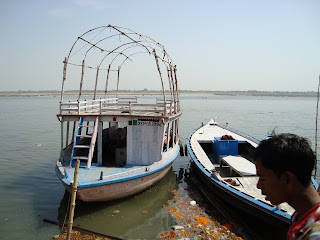 Then I left for Assi ghat with my roomie and his mom ...It was a wonderful scene with the holy river Ganges  and people taking dip in the holy water....then we went to another temple and offered puja to lord Shiva...
After that  we came back and I had tea...though eating fruit was an option but I thought I should better exercise restraining from eating rather than eating fruits...but eventually at night I had to eat fruits and milk and then I went to my bed and dozed off to sleep fast..

Next morning ( means today ) ..I cooked some Parathes and Aloo bhujiya to break my fast with... after the Puja of course....

It was a wonderful day yesterday...and I really enjoyed being in god's devotion ...and there were beautiful babes in the temple :P