Few days back two of my juniors barged into my room coz they were refused hostel accommodation due to their previous track records...

So......I told them "Then stay in my room" and within seconds they accommodated themselves fully and I was thrown outta my room :P...then I arranged another room for them..so that at least I can sleep in my bed..near my comp ...lol

Then it started...they all knew my previous habits of taking joints...coz then I had a few puff with them..so the session of loads of joints and booze started....and of course we had arranged for loads of chicks in my room..but not the whole..only leg pieces :P... Seven nights they were in..and I was neck deep in alcohol..some day I paid and someday they paid..and of course there were more than loads of cigarettes butts in my infamous ash glass...and then series of funny incidents happened... 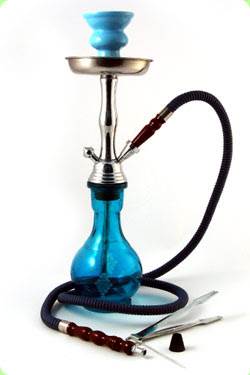 One day we decided to puff joints via a bomb..it's a makeshift arrangement with working principle of 'Hukkah' with the use of plastic bottle ...and it's more effective than the Hukkah itself..so they made it in my room wen I was in the department and called me in room urgently at 2 o'clock ..I rushed home..and found the bomb ready..

As I was sure my supervisor won't come..so I puffed it real hard... just wen I was in state of euphoria traveling in utopia .. "Symphony of mozart" started playing in distant..and it grew closer to me..and then I was shaken up

It was my supervisor on the line..he talked for a minute..of which i gathered none except..

I was so high that I started laughing and fell back in my bed..only to be put back on my feet by them..

They had naughty grin on their face..('maar li jayegi' is a term we often use...to say.. "man sumone gonna screw ur ass" )

I struggled out of the door..took a long breath..took out my bike and drove to department..but I did put a centrefresh in it and then I got a line to mind it in future ..

" Never take mint after the joint"

Man ..I got real high..I went inside the supervisor's chamber.. Had a fifteen minute talk..of which I gathered only one thing...

"u don't seem well..go to ur hostel now"

and I went back :P without even saying thanks :P

In the evening..I had a tuition to take..and I was lying on my bed with a feeling that an elephant is also sitting on me.. I took one more dep breath gathered my strength and moved for his house...where I don't know wat I taught him..all I remember I was sleeping on the couch..Glad..I was not in for a film shoot..otherwise I sure wud had been a victim of the casting couch :P
But I did made out one thing in conclusion..

" Abe! This is saturday...don't forget ..today is the booze day"

I was not in position to drink..but all I said,

The weed was in my room and they wanted to smoke now...So we smoked again...and got high in seconds...

I found myself shouting...

And unable to find the duck any more..I struggled and swayed to my bike..went to Lanka..where I found myself in a shirt ...

I was there in my briefs only.. I tried hard to remember about the pants..and all I cud remember..I dint wore any ... :P but no one questioned much.. Thanks to god..I came back..dropped to bed..and switched off the fone...

And from that day...My whole biological clock sleeping time is shifted to 5 in the morning ... and I only kno...how in the name of hell.. I come to department at 8... Email ThisBlogThis!Share to TwitterShare to FacebookShare to Pinterest
Labels: Moments of felicity

A story that touched my heart...

Few days back....I read one story...it was marvelous piece..and the author wanted that someone take some courage to do the translation of the conversation part which was in Hindi in original...so as to make readable to the international community..
I tried for it..and mailed it to author...


Few hours later..I got an SMS from the author ..but before I could acknowledge of getting the SMS and which was not going to happen soon as I was too low on balance...I got a call from a lady with a very lovely voice...She was so happy that she wanted to acknowledge my effort real fast.. and this was really very appreciative effort of her...we then had a long discussion and I was so amazed by her efforts in the literary field and her plans..I added some of my views..though m a kid to her but to my amazement she listened and actually quite agreed to most of that...and that made me feel more elated...she was lovely to talk.... and yesterday she finally completed the edited version of my translation....and since it's my effort..I want you to all to go through the story and leave her comments ..here or in her blog Arti 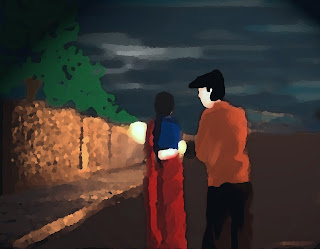 Deepak walked silently on the silent road. His footsteps echoed into the silent night as with every step his shoes hit the tarmac road. His mind was racing, churning out ideas, twice per footstep. He was not really the thinker types but tonight he was forced to put on his thinking cap. Someone rightly said that the major problem with telling a lie was not actually telling the lie but remembering it when questioned for the second time.

This was one of the reasons he never lied. But the main reason for not telling a lie was that he was a simple man and had no reasons to lie. He was loyal to his family and he was hard-working and a regular at office. His friends were few but he was truthful to all of them.

Then, what had happened tonight? Why did he have to think about the lie he would have to tell at home when his wife would ask him the most obvious question? He never knew something like this would happen in his life, ever. But, there is a first time for everything. He had not pre-planned anything, it just happened. He ended up spending one hour with a hooker.

To read more please click on the link for the .pdf file...

Since this is my first serious effort in literary field..It's my humble request to you to take out time for it whenever u are free.. and go thorough the complete version of it and fill in the gaps with ur views..
Đяёάmτ ъұ ♥ÐÅyÐяєÅмє®♥ at 6/02/2008 10:40:00 AM 57 comments: