So what are we doing???
Yeah we are playing the Blame game :)

And now The heart of the nation…the nation’s capital..New Delhi??

So what are we doing to stop the evil engulfing the world’s largest yet secular democracy??

This Saturday on 13-09-08. 5 blasts rocked nation’s capital New Delhi and 4 more were stopped before they could kill more that already 20 dead and above 100 injured. 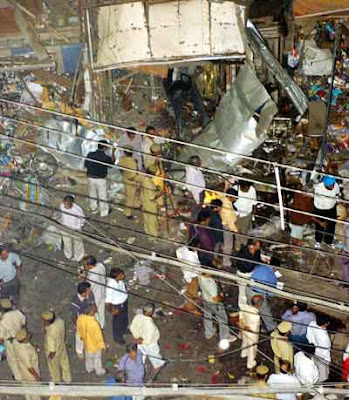 So who is responsible for the death of those civilians ??

Yeah!! I know a group Indian Mujahidin claimed responsibility, so who are they who come up every time and claim that “Yeah we have bombed the city” ??? It’s the LeT’s new name who are so scared of using their own name that they are using another name and that too with Indian written in front of it…so wat are they fighting for??? To remove that Indian name from the name of their organization whom they have named themselves?? Or, to satisfy their own libido for blood and violence.? I heard that Lashkar e Toiba means Allah’s army and Mujahidin means holy soldiers of jihad. LoL!! What a mockery of the name of a sacred religion…LOL and they claim to defend their religion.?? Assholes didn’t ever thought about the fact that this is their own holy month and they are making their own people scared of the fact that now there can be a religious riot or there will be more hatred toward their religion. So how can I blame them, they are so ignorant fools that they don’t know what they are fighting for and against whom their jihad is. lol

So whom to blame??

Government??Lol no no!! Our government is so tolerant in nature that they can’t hurt a fly leave alone stopping terrorism. In the fucking name of democracy and secularism, they were few days back supporting the uplifting of ban against SIMI, the mother organization who’s recruiting mercenaries from Indian soil only and they are smoothly operating as they have control over minority vote bank …and government is too busy saving the chair on which they can rest their sorry piece of ass. Do you know wat they came up in retaliation??? Speeches…LOL ..that’s what they are best at… LOL

So now I am tired searching whom to blame…

Fuck the break man! You could have saved at least one human being if instead of reporting ,you would had jumped for the rescue yourself. The media is first to claim, we have got the acceptance mail…Fucking retards …if they played a little sensibly and instead of shouting , wud had kept the mail for POLICE viewing first..the fucking terrorist won’t ever get any publicity…but…lol they have to report first..coz 1 billion retards are waiting to hear from them, who is responsible…as if they will catch them as soon as they get the report…naming 9/11 was of significance..but wat the fuk is 9/13 that’s being flashed as title of the breaking news…so media can’t be blamed coz these people are TRP hungry bastards who can even show their mother’s rape “Live” to increase their TRPs..so we can’t expect them to save the motherland coz that’s beyond their grasp of understanding…

So whom to blame then??

It’s fucking us.…we morons who are so busy scratching our own ass that we can’t see that the chair beneath is burning…we are so busy selecting government who will increase our wages and support our religion that we are forgetting the simple fact that government is incapable to protect us…we are so busy waiting to hear the sensational news of how the 16 year old was raped that we forget that sumday that young girl might have the face of ourfamily…we are so busy gossiping who died and what happened to their family that we forget that instead of gossiping …we could had spared few bucks to relief funds so that that guy who died without any fault can rest in peace that his family is at least safe …we are so busy worshiping the god and the religion that we forget the basic fact that God has left our world a long time back and we are now on our own….

So do something rather than sitting and making it a fact of gossip that 20 people are dead in the blast..coz one day it might by you who will die for nothing coz some freak thought he could become famous blasting u up…so what’s the use of the life if u r not sure when are u going to be killed…so at least die for a purpose with a cause..instead of dying for nothing….

“The only thing necessary for the triumph of evil is for good men to do nothing.” -Edmund Burke

So rise up Good people..rise up…coz it might be you….the next victim.

May God be with you…