The Land of The Rising Sun 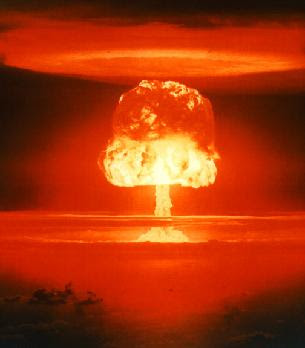 The sun rises from the east,
The fact that everyone believes,
But today there’s one sun in the town square,
Engulfing the whole town, in its fire.
The days were not quite and in ease,
None slept with any peace,
As the war was in the sky,
The land of rising sun was fighting the allies.
But that day was as bright as before,
The tides were as calm as before.
As the peace was dawning on,
The dark day clouded the dawn.
Two falcons screamed high in the sky,
Sirens blared increasing the fright.
But nothing happened to their surprise,
As it were the recons that passed by.
But the hope of peace turned into scream,
A fleet of falcons flew in like a beam.
Dropping the ball of inevitability from the sky,
Thundering the entire city with the cry.
The land lit up with two suns,
The allies played their first fun.
They dropped the first nuclear bomb,
Made the Hiroshima deaf and numb.
The city crumbled in the fire,
Concretes flew like flyers,
The people burnt like the wire,
Agony screamed like never to tire.
The light soon turned into dark,
The ashes hovered in like a shark.
The cloud of dust, the cloud of smoke,
Forced each breathe to choke.
The dark day seemed never ending,
Every moment death kept on raining.
Human’s first weapon for fun,
Annihilated the whole empire of the rising sun.
-Sourish Karmakar
This piece of work, i had wrote way back in my B.Tech days... in the classroom...jus found it ...lying in pool of papers...so thought to share it...this poem is dedicated to all the brave people of Hirsoshima and Nagasaki as they still are bravely fighting the nuclear holocaust and it's aftermath...think..how one human can kill another ..and how wonderfully he finds newer ways and make the world more unsafe...
God bless u all..and Pray with me that we all remain safe...

Email ThisBlogThis!Share to TwitterShare to FacebookShare to Pinterest
Labels: Poetries