Disclaimer : Please read it at ur own risk...it is completely a fun post with little adult talks..and readers are advised not to sue me for the contents :)

I read all the times everywhere especially women bloggers about our ( male community ) fixation with the cleavage....and really never found out the reason for that.....rather I found people calling as perverted for that....  :-|

So in a search for truth ..I fst checked out what the famous OXFORD dictionary says about the cleavage..


Cleavage
The Oxford Pocket Dictionary of Current English | 2009 | © The Oxford Pocket Dictionary of Current English 2009, originally published by Oxford University Press 2009. (
cleav·age / ˈklēvij/
• n. a sharp division; a split.
∎  the hollow between a woman's breasts when supported, esp. as exposed by a low-cut garment.
∎  Biol. cell division, esp. of a fertilized egg cell.
∎  the splitting of rocks or crystals in a preferred plane or direction.

Unable to find answer ..I googled it...and I found the following image

Actually..I never gave it a thought ..as I normally don't think...but last day boys of my labs were oogling on one cleavage and whole day they were discussing that to me coz I was busy in other works...leading to missing of the gala event of her bending down and that too wearing the low cut....But the fact that surprised me was the fact that i was feeling so jealous of them even when I got a fair share of free Cleavage shows....

The reason behind the curiosity is the reason why every damn Scientist spend their entire lifetime working on some freaking project...
it is damn interesting...

But today I read in one of my frnd's blog...that we shouldn't stare them ...

But see ..as per Oxford only
"the hollow between a woman's breasts when supported, esp. as exposed by a low-cut garment"

Here it is clearly mentioned that " especially as exposed...and I don't think if woman find it derogatory they wouldn't have dared to expose it to us the normal oglers ...they flaunt it ...they go for wonder. and what not...

so why we the poor men are called perverted....

If god made beautiful things than he did gave us the sense of appreciation.....


We are just mere appreciating...and moreover ..it is in human nature to be curious about something protruded forward.... 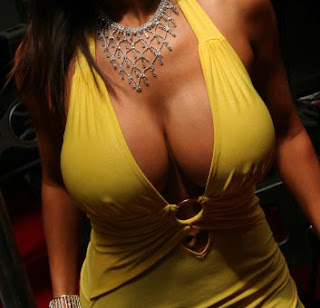 So u say women won't stare if that guy got a bulge in his shorts checking her.....???

PS: This post is dedicated to all those guys who silently admire the beautiful creation of  god..." The cleavage "

PSS: This post was not at all for insulting women..was written only for crude humors and my apologies goes for all those women who felt offended reading it even after the disclaimer.... :) with a line that i really admire hot women or women with hot assets :P
Pic Courtesy: All links intact :)
Đяёάmτ ъұ ♥ÐÅyÐяєÅмє®♥ at 6/11/2009 02:24:00 PM