**** I am not responsible if u r gonna follow my analysis and I am not also not taking responsibility for any political fallouts :P ***
You must be thinking this will be one more analysis on Indian Election...but I am not gonna make u bore with some Poll analysis...even when it was so tragic to see 48 to 50 % votes in main stream state of Maharashtra, Bihar and UP.. it is more tragic to see 19 dead in Naxalite attacks ..paying the cost of the democracy which I don't think anyone respect nowadays.. though I loved the turnouts in insurgent hit states and I am proud to mention my brothers and babes :P who turned out in great numbers to respect the Indian democracy...while the bhaiyas and Bhais of UP, Bihar and Maharashtra thought to sleep it over....

Bhajji and Dhoni Bhaiya didn't turn out to Rashtrapati Bhavan to receive the country's one of the most prestigious award rather they turned out to some endorsement program of cups and balls before turning to South Africa to Play Indian Premier League - 2 ...  Cliche of the Cliches :P..

So what is this analysis all about...

it is about the recent political revolt in Indian democracy...yeah ! I am talking about the Shoegate ...lol !!! I learned yesterday  that there is a new terminology called as shoegate for shoe throwing on Leaders  and one spokesperson of BJP was furious when Headline today's anchor used Slippergate for the latest quest of Advani's..he said slipper sounds so cheap...I think they might be disappointed that leader of that stature and chappal..he deserved at least a branded one ....lol...Shoegate analysis sounds like watergate scandal... :D

Let us see the main objects under present study 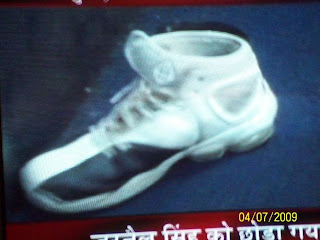 This is Reebok Trainer..number 9 ...so neat and clean....I think it's new..just bought for this purpose :P

Gosh! it was so Rapidly thrown and Returned back I didn't got any clear pic of it.. 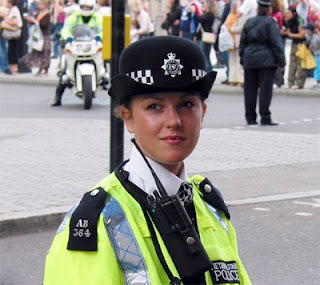 oops ! this is not the joota..this a hot chick I found while googling Shoe on Naveen Jindal....
Gosh! She is hot..I am gonna break all rules just to get a ticket from her...Google sumtimes play funny tricks :P..ok coming back to point.... ( Gosh! she is is distracting..she might cause more road accidents than preventing ) 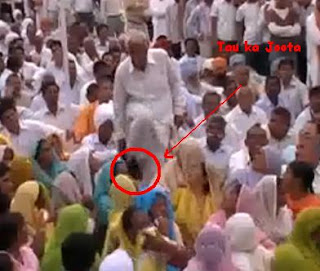 Inne bade neta and Chappal :O ?????...Ridiculous.... Advani was furious with Chappal and thus forgot to read the message behind it  as first told by BJP to Congress :P


Now My research ..hhehehehe Can't Help my Engineering Research Blood sumtimes give such a big push :D
If u see the publicity vs Analysis curve ... with reference to Bush's Shoegate scandal...( Standard cost shoe) 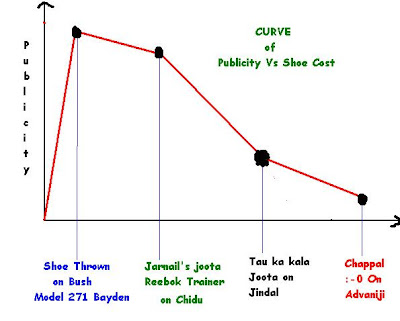 It can be clearly inferred that the Publicity is proportional to the Cost of the Shoe ...

So if anyone is thinking of trying for rapid publicity...go for Woodland or may be Gucci...I am sure the later one can give u internatonal fame...but remember ...don't forget to insure ur shoes..coz  u r not getting them back :D... one ain't always so lucky as Tau who hit Jindal :P

U must be thinking I am endorsing it...Yeah! I am endorsing it...coz when politicians can play politics of caste, murders and genocide in India..we can defn  protest by throwing shoes in our democracy..as they really don't understand any other language...and btw they themselves throw missiles inside Parliament..remember shoe and chair throwings inside Parliament which led to fixing of chair and tables on floor in parliament :P


Tips For Politicians: Learn from Mayawatiji....She is now speaking inside a Glass Air Conditioned booth in Rallies :P

Trivia : Do u kno the that Bush shoe episode created Hundred jobs :P ????? Go though it :P